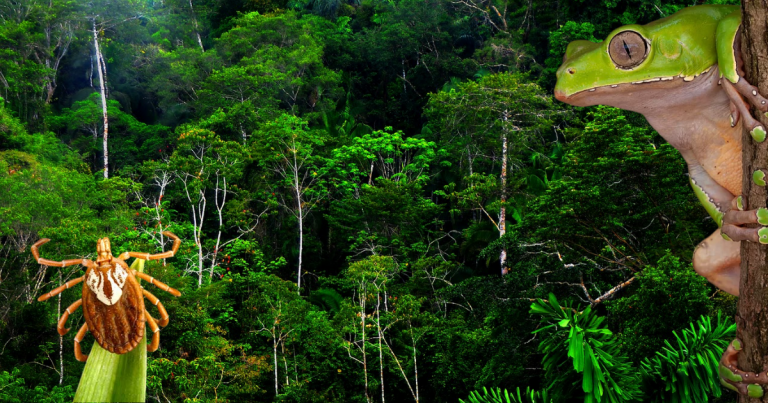 As Kambo practitioners, many of us have seen an increase in individuals seeking out Kambo for relief of their chronic conditions. With conventional medical treatments leaving much to be desired, thousands of people are turning to Kambo in a desperate attempt to curb their suffering from physical ailments such as Lyme disease, depression, metabolic disorders, and autoimmune conditions. Anecdotal reports display great potential for Kambo being a solution to many conditions, but as more and more sick individuals seek Kambo out, it will become more and more crucial for practitioners to have the expertise to approach individuals with fragile health.

Lyme disease is a condition that is growing in awareness as it appears to be afflicting more and more people each year. Experts may attribute this to climate change, compromised immune systems, and an overall spreading of the pathogen. Lyme disease is known to be caused by a bacterium called Borrelia burgdorferi typically contracted from the bite of a tick. Borrelia Burgdorferi is a spirochete, which means it has a corkscrew-like shape. This structure allows B. Burgdorferi to burrow into various tissues such as the heart, bladder and joints. Hidden in the depths of the tissues, the Lyme disease-causing bacteria evades the immune system in a number of ways, including changing shape into cystic forms and creating biofilms impenetrable to antibiotics.

While there is consensus that the presence of B. Burgdorferi is implicated in the development of Lyme disease, it doesn’t seem to be as black and white as one would hope. There is much disagreement in the medical community about the definition of Lyme disease and if it’s possible for someone to have what is called “chronic Lyme disease”. By medical definition, no such condition exists, which infuriates those who claim to have long-term chronic infections due to Lyme bacteria. Doctors, do however acknowledge something called Post-Treatment Lyme Syndrome, which they claim is a condition that occurs after the Borrelia have been effectively eradicated with antibiotics.

There is also some disagreement about how Lyme disease may be contracted. It has always been assumed that a tick bite from a black-legged or deer tick displaying a “bulls-eye” rash was necessary for contraction. In one survey study, only 40% of those with Lyme disease reported the bulls eye rash, but estimates from other sources vary between 27% and 80% of individuals that get the characteristic rash1. It’s also possible that there are other vectors. Other insects such as mosquitos, horse flies and lice have been found to contain B. Burgdorferi, though it is unclear if they actually transmit the disease2. There have also been confirmed cases of babies contracting the bacteria in utero from an infected mother3, in addition to evidence that B. Burgdorferi has the potential to be a sexually transmitted infection, given it’s observed presence in sexual fluids, and it’s spirochete similarity to syphilis4.

Symptoms of Lyme disease can be quite variable, making it difficult to identify and diagnose. Symptoms may include fatigue, body aches, depression, neurological effects, brain fog, joint pain, rashes, headache and more. Diagnostic tests are lacking in accuracy and often diagnosis is done by observing symptoms and the knowledge of previously being in a tick-infested area5.

If caught immediately after contraction, an aggressive antibiotic treatment is often effective. However, many individuals don’t have immediate awareness that they have contracted it. When left untreated, the bacteria can migrate to other areas such as the nervous system, joints and heart and cause long-term complications5. Once the B. Burgdorferi bury themselves in these tissues, it becomes very difficult to target them with conventional antibiotic treatment. This supports the argument against official medical recognition that chronic Lyme disease infection is possible due to the skilled evasion of the bacteria from the antibiotics and immune system.

But why do those who are treated for Lyme still suffer from Post-Treatment Lyme syndrome? It appears that the presence of an infection such as B. Burgdorferi, or other pathogens can prompt the body to develop an autoimmune response. In essence, the stress of fighting the infection can induce confusion and dysregulation in the immune system which then leads to auto-antibodies, or immune cells that start attacking healthy tissue. This connection between Lyme disease and autoimmunity is why people with these conditions share similar symptoms and usually have comorbidities6.

While true clinical research with Kambo is non-existent, there are thousands of anecdotal reports of those afflicted with Lyme disease having substantial improvement after the use of Kambo. There is not enough data to draw conclusions, but Kambo appears to be effective likely for a couple of different theoretical reasons.

2. Kambo peptides such as dermorphin, deltorphin and sauvagine combined with the power of intentional ritual influence the nervous system stress response and thus have immune-modulating downstream effects9.

3. The physiological effects of Kambo may restore homeostatic balance to many systems in the body, allowing for a more robust immune response to occur in order to fight off chronic infections such as Lyme bacteria9.

While Kambo appears promising for Lyme disease clients, it does come with a cost. Those with Lyme disease and other infections often experience something called the Jarisch Herxheimer Reaction (Herxheimer for short), or Die-off effect. This is a phenomenon that occurs due to the dying of organisms in the body. Symptoms often come on within a few hours, and can last for up to several days. Herxeimer/Die-off reactions can look different amongst individuals but often include fever, fatigue, body aches, rashes, joint pain, changes in temperature, nausea, vomiting, tachycardia and general flareup of the individuals usual symptoms10 .

The Herxheimer reaction was first described in patients being treating for syphilis, another spirochete, after undergoing antibiotic treatment. Since the original description, it has since then also been observed in those with other bacterial, fungal and protozoal infections. While most cases are usually simply uncomfortable for the patient, severe Herxheimer effect can cause extreme complication and be life-threatening.

What causes the Herxheimer effect?

The exact mechanisms of the Herxheimer effect are still unclear, as they appear to be complicated. As spirochetes like Borrelia burgdorferi die, they can burst open and release various endotoxins and lipoproteins, such as lipopolysaccharide (LPS). These endotoxins can enter the bloodstream and induce a type of immune cell called a macrophage to release inflammatory signaling molecules called cytokines such as interleukin-6 (IL-6), interleukin-8 (IL-8), and tumor necrosis factor-alpha (TNF-α)10. Release of these cytokines induces systemic inflammation which cause the typical symptoms of fever, nausea, body aches, rashes etc.

Kambo and the Herxheimer

As Kambo practitioners, we are very familiar with the recovery process after someone receives Kambo. Even relatively healthy individuals appear to experience symptoms that one could describe as the Jarisch Herxheimer Reaction. This effect appears to be more substantial in those afflicted by Lyme disease or other infections such as Candida albicans (yeast), Epstein-barr virus, Herpes Simplex I and II, Babesia and other pathogens.

So, how can we support and protect our clients who may be prone to the uncomfortable and potentially dangerous effects of Borrelia burgdorferi die-off? Here are a few key ways to make sure your client recovers smooth and safe from their Kambo session:

-Dose low and slow. Often those with Lyme disease are quite sensitive to Kambo. Always do a test-point on first-timers.

-Use nutraceutical supplements and herbs to mitigate the inflammatory effects as well as binders to escort Lipoproteins out of the bloodstream.

-Be sure to inform your client of the potential symptoms. Warn them that they may experience them and that this is to be expected.

Kambo holds much potential to provide relief and resolution for the many souls who live in pain due to Lyme disease. If you do decide to take on such clients, make sure that you have the experience, patience and expertise to fully support them in their Kambo journey. 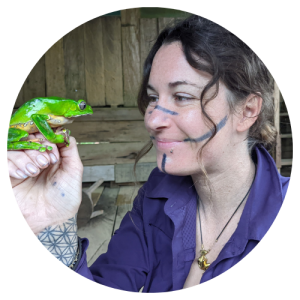 Caitlin Thompson is a seasoned international Kambo practitioner having served over 1,400 clients with a specialty in Lyme disease, autoimmune conditions and other chronic illnesses. Caitlin came to her specialty through conquering her own personal battle with Lyme disease and chronic illness symptoms. She is proudly in remission with consistent vibrant health.

Caitlin is formally educated as a neurobiologist and is a research associate at UCSD School of Medicine. She operates as an independent scientific researcher with her previous studies  focusing on psychedelics and their potential for treating autoimmune conditions and the prebiotic effects of herbs on the human microbiome. She is currently pioneering some of the first human studies on Kambo.

Caitlin has been featured in over 80+ podcasts, interviews, conferences, speaking engagements and even international television appearances as a leading Kambo expert. Her set of skills makes her uniquely qualified to integrate the art and magic of Kambo with the scientific world. 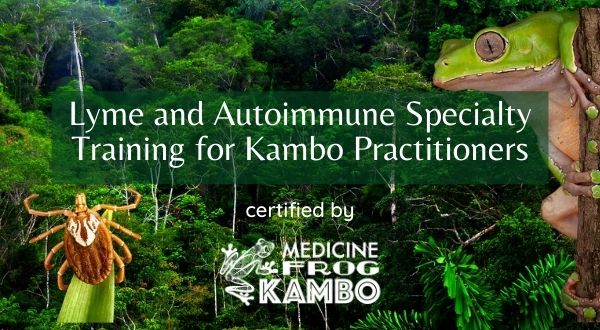 If you are a Kambo practitioner looking to expand your area of expertise in working with clients afflicted with Lyme disease and other autoimmune-related conditions, I offer a 3 day intensive and interactive online course to equip you with everything you need to safely and effectively approach those with fragile health due to these conditions. For course details you can visit https://kambospecialist.com/lyme-and-autoimmune-kambo